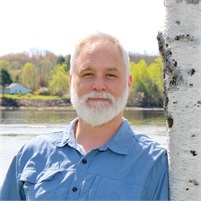 Having received his Bachelor's degree from Stephen F. Austin State University in Texas, Tom moved to Maine in 1988 to complete his Masters in Entomology at the University of Maine. While in Graduate School Tom and Dee were married and moved to Frankfort. Then in 2008 they completed building of the new house in Sedgwick and have lived there ever since. Dee is a Special Education Teacher at Ellsworth High School.  Their son Trent studies Environmental Science at Castleton University in Vermont.

After he completed his degree at the University of Maine, he worked at Acheron Engineering for ten years as a Biologist and Project Manager.  During his time at Acheron a colleague peaked his interest in investing. When Tom finds an interest he tends to read about the subject quite a bit.  When it was time to move on from Acheron and knowing he wanted to stay in this area, he soon discovered there where not a lot of biology positions.  Consequently investing seemed the natural progression.  In 1999 he opened an Edward Jones office on Main Street in Bucksport.  In 2003 he decided to become an independent advisor and started Financial Solutions.

Tom has served on the Bucksport Bay Area Chamber of Commerce for 13 years. He was the Vice President for four years and the President for six.  Additionally, he served several years on the Boards of The Friends of Fort Knox and Gardners Commons Elderly Housing.

Over the years Tom’s interests have included mountain bike racing, road biking and whitewater kayaking. Six years after the arrival of Trent, Tom's interests morphed. He and Dee then devoted their time to following Trent's wrestling career from the "Bucksport Youth Wrestling Program" to the National level thru high school and now watching him wrestling at the collegiate level.  Additionally, they both (he and Trent) enjoy traveling to Dave Matthews Band concerts around the country.  As a new empty nester Tom has turned his attention to poison dart frogs where he spends quality time with his frogs breeding and sharing with others who have similar interests.